Ever since the newest ASE/EACVI guidelines on diastolic function were published in 2016 we had the urge to again tackle the topic of Cardiac Filling. Our new Cardiac Filling Masterclass will help healthcare professionals master the topic in a simple and intuitive way.

Pre-register now for our new course Cardiac Filling MasterClass and get free contents in advance.

Ultrasound is a method that employs reflected waves to form an image. The images we obtain are just a “representation” of structures in our body. The heart is not really composed of little speckles in different shades of gray. Blood flow is not truly red or blue as we see on Doppler. Structures in the body are frequently bizarre in shape, which cannot be appreciated by a cut-plane technique like ultrasound. Sometimes we are not able to see the pathology at all, but can only infer it from parameters we obtain with echo. At one of our last webinars I showed you a patient with the typical physiology and features of constrictive pericarditis. Now that the story has unfolded, I'd like to show you the true pathology behind the echo findings.

How it all began
Let me tell you a little more about the patient and review the typical features of constrictive pericarditis.It all started 6 months ago when Jürgen, a 33-year-old waiter, was diagnosed with acute pericarditis. He presented with high CRP, fever, chest pain, and tachycardia. The diagnosis was established with echo. Here is the initial finding:

Pericarditis. Fibrinous and partially consolidated material
is seen in the pericardial space.
You can see rather echodense material in the pericardial space. One would classify it as “fibrinous pericarditis”- a condition usually caused by some type of bacterial infection. There was not much fluid left, so the infection was starting to consolidate when I saw him. More importantly, note the awkward motion of the septum at this early point in time.

Septal bounce and leftward motion of the interventricular
septum during inspiration.
Those of you who regularly read our posts and recall the case that I named “Fear of Complexity” will realize that this motion is indicative of a constrictive pericarditis. In the acute phase, when a certain quantity of fluid is present, it is known as a sero-effusive constriction.
What happened next
It is not unusual to see some degree of constriction in the acute setting of pericarditis. It usually resolves after a while. We decided to check on him six months later, after his pericarditis had resolved. On a side note: all cultures proved to be negative. Tuberculosis, which is the most common cause of fibrinous pericarditis, was ruled out. Jürgen came back and told us that he was simply unable to exercise as intensively as he used to. On some days he would notice a swelling in his ankles. He was now taking diuretics, which had alleviated his symptoms to some extent. Was constriction still present? Take a look at the echo and judge for yourself.

Not much has changed in respect of septal motion.
He still has constrictive pericarditis.
He still has abnormal septal motion. One can see the septum bouncing back and forth, as well as a sharp leftward motion of the IVS during inspiration. This, in my view, is the most reliable sign of constriction. To confirm the diagnosis we performed a full evaluation, including hepatic venous flow, tissue Doppler at the mitral valve annulus, and recording of mitral inflow during respiration. Here is this tracing: 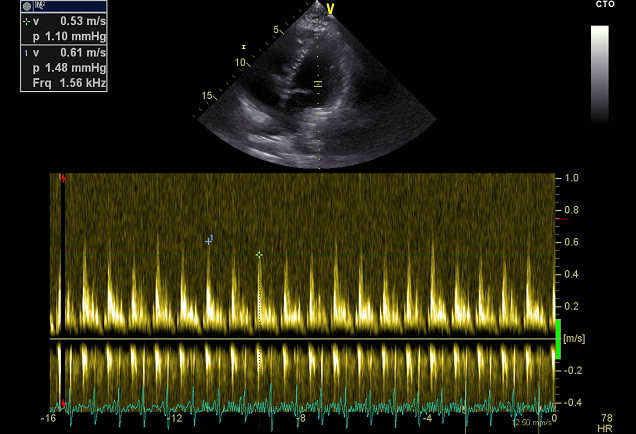 Making a decision
What now? Most patients we see with constriction are in the final stage of disease, with massive signs and symptoms such as dyspnea, peripheral edema, hepatomegaly, ascites, pleural effusion, and even anasarca. In comparison, Jürgen was mild symptoms. Magnetic resonance showed mild thickening of the pericardium. Is he already a candidate for pericardectomy? Surprisingly, CT of the abdomen showed starting fibrosis of the liver (caused by congestion). Hence we were convinced it would be best to operate early.

The moment of truth
On the day of surgery I was called to the OR to help assess the patient during operation.I was a bit shocked when I saw the intraoperative TEE. His left ventricular function was poor. Had the procedure of anesthesia and the manipulation of the heart served as the last straw that triggered latent left ventricular dysfunction? The pericardium had been peeled off, but the patient still had pronounced constrictive pericarditis.
Intraoperative TEE: LVF is poor and constrictive pericarditis
is still present.
Surgical inspection showed that there was an additional thin but tight layer of fibrous tissue attached to the epicardium. The surgeons decided to shave this layer off as well. Here is a video of this procedure:

Locating the source of the evil
Almost the entire fibrous capsule had been removed from the heart. The following image shows what we were unable to see on the echo. What was the actual underlying problem? 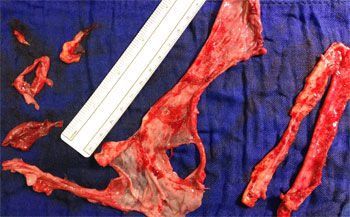 Surgical specimen: a very large quantity of fibrous tissue
was removed from the heart.
A happy end?
Jürgen recovered quickly. He was extubated the same day. Three days later he was walking around in the ward. With a smiling face he said, “I already feel better. Less pressure on my chest and I can breathe freely now.” Do we see an improvement on the echo as well? Here is a comparison of the pre- and postoperative TTE study.

Preoperative (left) and postoperative short-axis view:
note that septal bounce and septal shift are markedly reduced.
Sure, Jürgen still has a small amount of fluid posterior to the left ventricle, but the abnormal septal motion has almost disappeared. This can also be seen on the apical four-chamber view.
Preoperative (left) and postoperative apical four-chamber view
showing much less septal bounce and septal shift.
Again, compare the two images. Doesn’t the postoperative echo look much better? We performed a thorough evaluation of his filling physiology. The inferior vena cava was still mildly dilated and the hepatic flow profile somewhat abnormal. Take a look at the Doppler tracing of mitral inflow: a perfectly normal tracing with no respiratory fluctuations in maximal velocity. 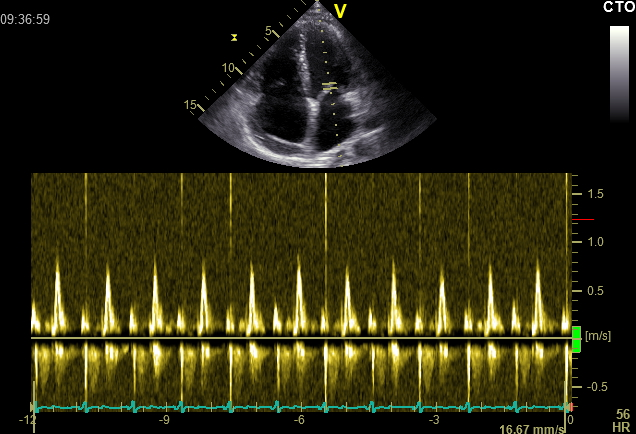 Normal pattern of mitral valve inflow with no change
in maximal velocity during respiration.
The final judgment
What is my final judgment? I am convinced we were able to help Jürgen. The timing was perfect. It may have been much more difficult to remove the fibrous layer if we had waited much longer. Will Jürgen recover completely? I don't know. To be honest I think he still has some degree of constriction. Let us hope it does not significantly influence his exercise capacity or the prognosis of his condition. Let us also hope a new capsule does not develop due to the surgical trauma.

What we learned
What is the key message for those of us who perform echo? Jürgen's case is a perfect example of constrictive pericarditis and how it can be treated. Besides, it shows how important it is to combine what you see on the echo with the patient's actual anatomy. So take your time to attend the autopsy and get to know the actual pathology. You will be pleasantly surprised to note a steep rise in your own learning curve.

PPS: Maybe one or many of your friends would be interested in learning from us. Feel free to tell them about us or forward this post to them.