Visual assessment of the right ventricular function is important. Usually the RV shows more inward motion relative to its size than the left ventricle. You will also note more longitudinal motion. For visual assessment it is important to look at several views in order to account for regional differences in function. 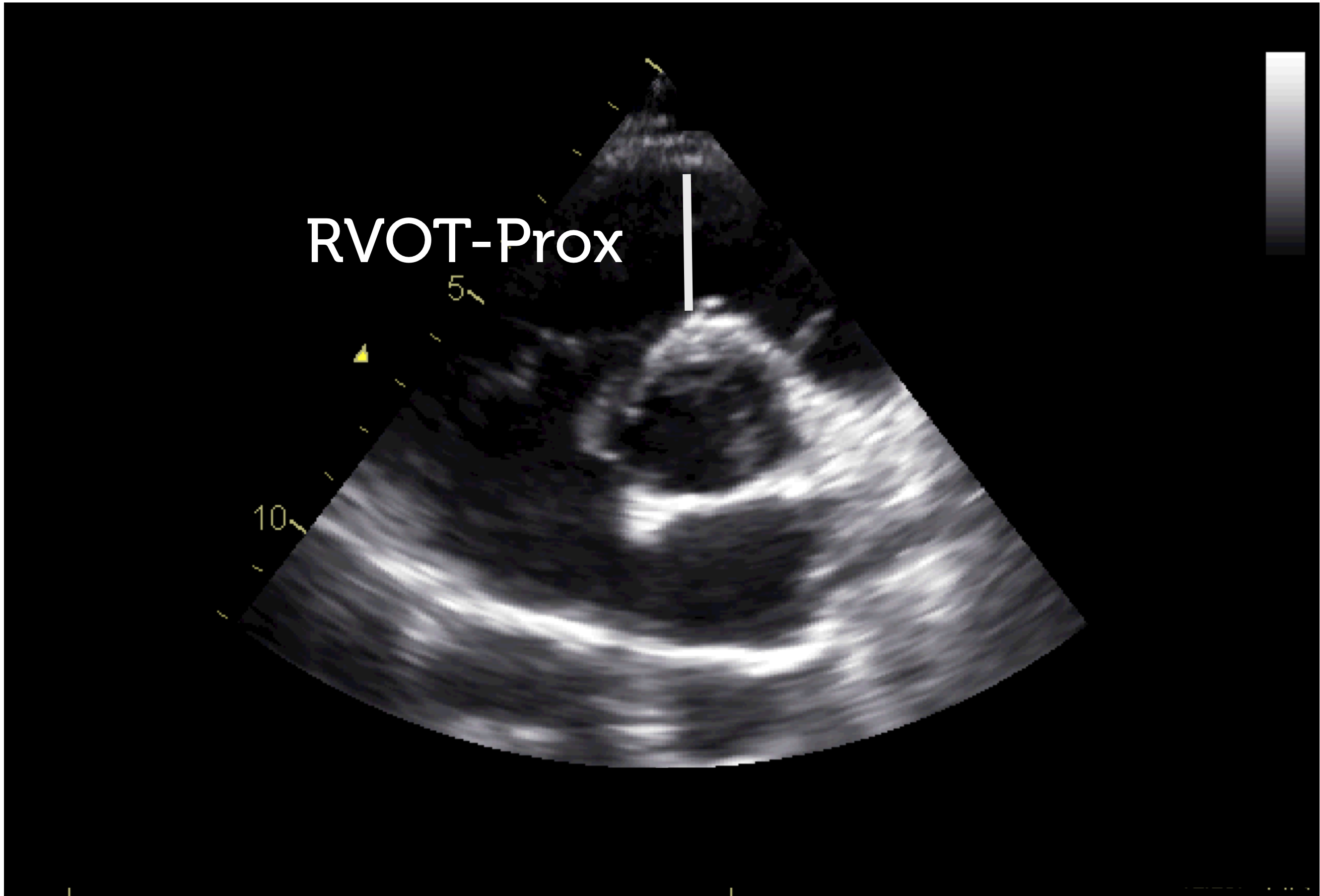 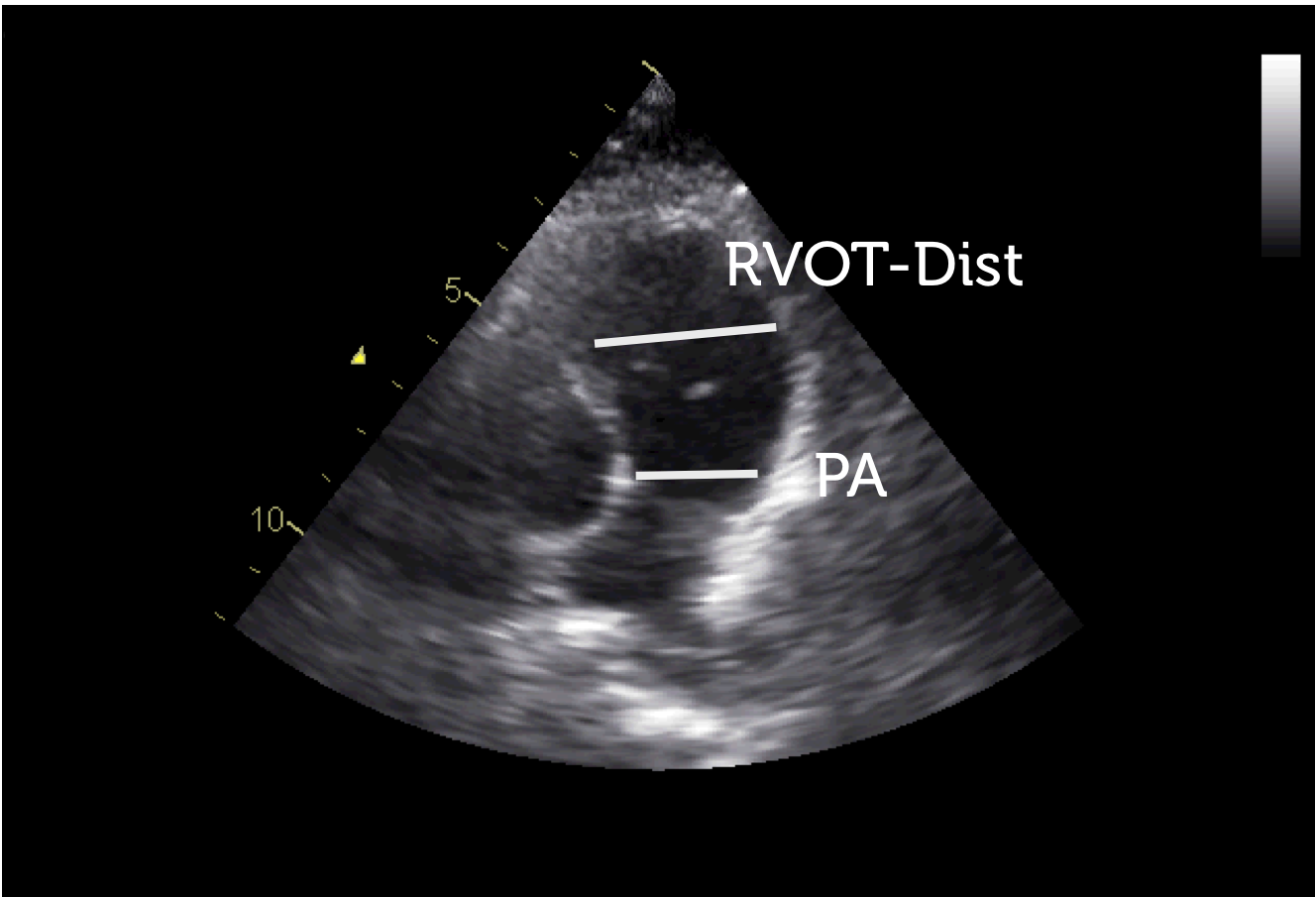 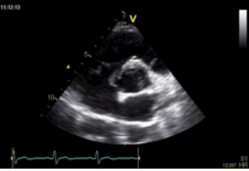 Area is assessed by tracing the endocardial boarders on the apical or subcostal 4-chamber view. Tracing the right ventricle is far more difficult than tracing the left ventricle, especially because of the numerous trabecula that make it difficult to define the cavity of the ventricle. The normal value for the RV area is < 18 to 20 cm2 and end diastole. 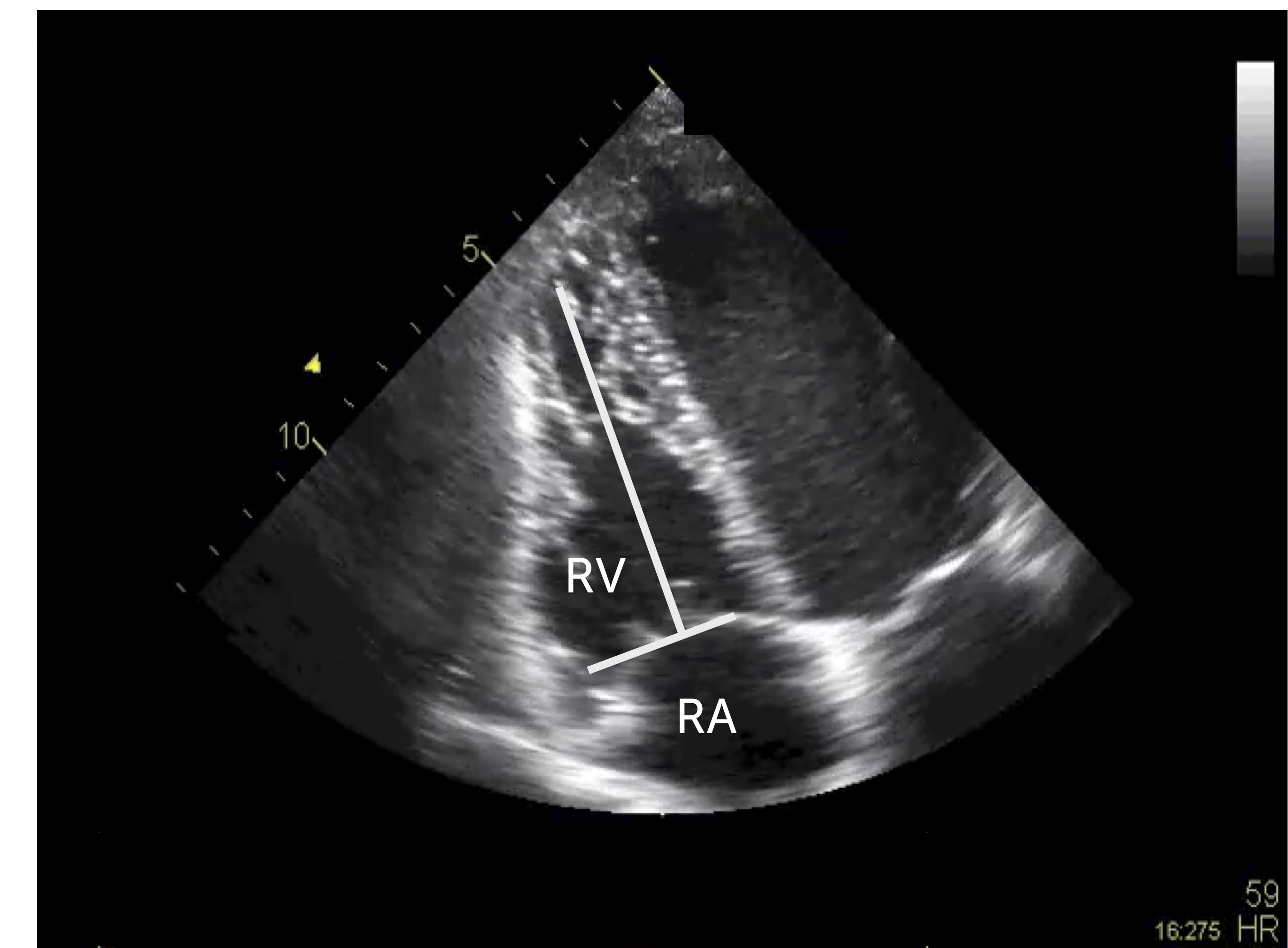 Measuring the length of the right ventricle, use a slightly angulated view to display the entire RV apex.
The RV appears larger when the transducer is positioned too far in the cranial aspect. 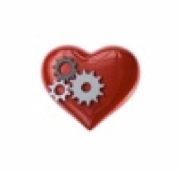 Several methods have been proposed for quantification of right ventricular function. The most relevant techniques are presented in this section. Obviously you will not need to perform them all, but use at least use one or two, especially in patients in whom right ventricular function is very important. Also consider the fact that echo is by far less accurate than cardiac magnetic resonance imaging (CMR), which may be regarded as the gold standard.

CMR is the gold standard for quantification of right ventricular function. However, this method also has limitations.

Visual assessment of the right ventricular function is important. Usually the RV shows more inward motion relative to its size than the left ventricle. You will also note more longitudinal motion. For visual assessment it is important to look at several views in order to account for regional differences in function.

Direct quantification can be performed by calculating fractional area change. This is done on a 4-chamber or subcostal view by tracing the end-diastolic and end-systolic cavity, and calculating the percentage change in area. 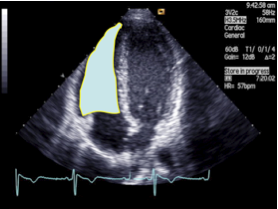 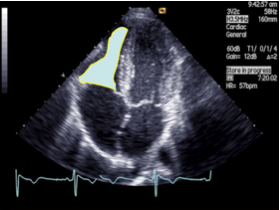 Measurements of ejection fraction would certainly be the best way to describe right ventricular function. However, a reliable method is not available for the right ventricle because its shape is too complex and defies the use of any simple geometric model. Therefore, 2D calculations of ejection fraction are not performed. Three-dimensional echocardiography offers a solution, as it would permit calculation of true volumes. Several techniques have been introduced, some of which require minimal user interaction. Thus, 3-D echo might become the method of choice in the future. 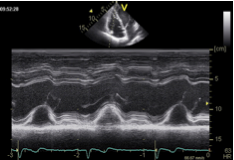 Longitudinal function of the right ventricle can also be assessed with tissue Doppler. This is done by placing the sample volume at the base of the free right ventricular wall. The spectrum looks quite similar to that of the left ventricle. However, in normal individuals the systolic deflection (S) is usually somewhat higher. The maximal velocity of "S" represents longitudinal right ventricular function. The lower limit of normal is 10 cm/sec. 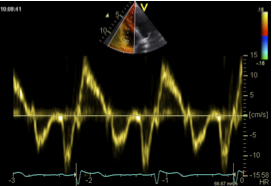 When using tissue Doppler to determine right ventricular function, the wall of the right ventricle should be as parallel as possible to the Doppler orientation.

The myocardial performance index (Tei index) is calculated either from the Doppler inflow signal of the tricuspid valve or the TDI spectrum and the tricuspid valve annulus. It is calculated as the isovolumetric contraction time + isovolumetric relaxation time divided by the ejection time. This might sound complex, but is quite easy to calculate in clinical practice. All you need to do is measure the distance between two consecutive PW tricuspid inflow curves (a) and divide this value by the duration of pulmonary outflow (b). If you use tissue Doppler the ejection time is measured by the duration of "S" (see the formula below). The Tei index reflects both systolic AND diastolic function. Thus, it is a global parameter of myocardial function. The normal range is 0.32 to 0.24; values above 0.32 denote reduced right ventricular function. 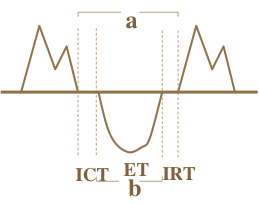