Don’t worry, today’s case has nothing to do with Boolean algebra but more with ventricular aneurysms...A 47-year-old carpenter came to the cardiologist’s office with mild to moderate dyspnea.  The ECG showed an infero-lateral myocardial infarction with mild persisting ST-elevation. 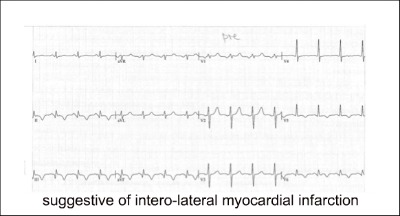 Let's take a look at the patient's echo:

There is clearly “out pouching” of the inferior wall. A “cavity” that communicates with the left ventricle via a rather broad neck. In addition, you can see moderate to severe mitral regurgitation. The pulmonary artery pressure was 49mmHg. But, is this really a “true” aneurysm? Well, we were convinced that the aneurysm was not a true but rather a false aneurysm.


An additional atypical view shows that the “cavity” extends far towards the apex. The disruptive nature of the myocardium and the morphology of the cavity are highly suggestive for “concealed” myocardial rupture, which is also termed “pseudoaneurysm”. A psuedoaneurysm is a potential complication of myocardial infarction where myocardial rupture is contained by pericardial adhesions. It can occur both in anterior and inferior infarction. Statistically they occur more often in the inferior and posterior wall and in single vessel disease. Typically, you will find a cavity, which freely communicates with the left ventricle. The communication often has a narrow neck, but as this example shows this is not always the case. Mitral regurgitation is “functional” and caused by the geometric abnormalities of the left ventricle leading to displacement of the postero-medial papillary muscle and posterior leaflet restriction.
We referred the patient to a cardiac surgeon. This was certainly a good idea since patients with pseudoaneurysms are at increased risk for “secondary” rupture and death. But the patient didn’t quite understand the urgency of the situation. It was actually his wife that eventually made the decision for him to be admitted to the a cardiothoracic center.

The following echocardiogram was performed shortly before surgery. What had changed? Fortunately the aneurysm did not expand. But now systolic pulmonary pressure was significantly higher (70-80mmHg). 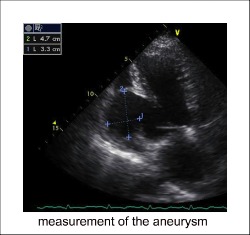 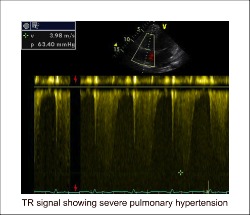 Now, our patient really had dyspnea (NYHA III). But at least he also understood the urgency of the situation.
He underwent aneurysmectomy and mitral valve reconstruction with ring-implantation only shortly after. Bypass surgery was not necessary since the patient only had one vessel disease (RCA occluded) and because no viable myocardium was present in the inferior wall.
Postoperative echo showed a good result with only mild residual mitral regurgitation and mild pulmonary hypertension. Left ventricular systolic function is still moderately reduced.

In conclusion, the differential diagnosis between a false and a true aneurysm is not always easy. As mentioned above the width of the aneurysm does not necessarily provide the diagnosis. Important clues in favor of a  pseudoaneurysm are: “discontinuity” of the endo- and myocardial layers, complex shape of the cavity and coexistence of pericardial effusion. Always consider a pseudoaneurysm in the setting of an acute myocardial infarction. And if you are not sure use other imaging modalities, especially cardiac magnetic resonance imaging (CMR).

Please forward this message to anyone who could also be interested in improving their echo skills. We would be happy to teach them as well. Stay tuned for more interesting information to come.

Recommended articles:
Where is Waldo on the Echo (Part 2)?
Helping Doctor Best
Old and New