Face to Face with Anubis

After having spent more than 20 years in echocardiography, I have seen quite a few spectacular echoes. But I have never seen a case like the one provided from Dr. Mohamed Sedafy, a dedicated cardiologist and echo trainer in Cairo, Egypt.

The threat of Anubis
Several complications may occur after myocardial infarction. Although they are relatively infrequent, most of you will have seen conditions like papillary muscle rupture or an ischemic VSD, or even myocardial rupture. However, the case provided by Dr. Mohamed Sedafy is really unique. 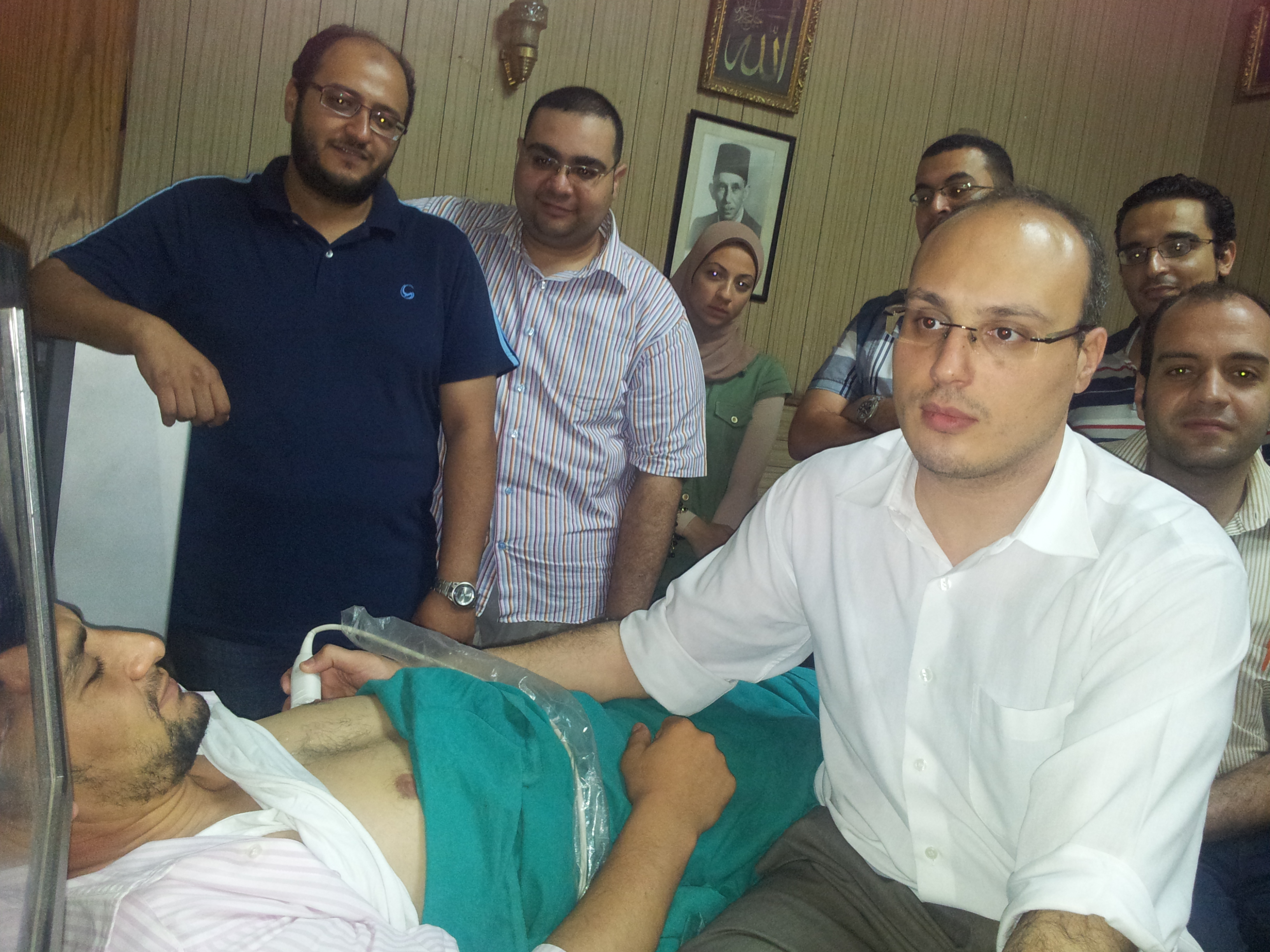 Dr. Sedafy and his students at a training session.

Mohamed Sedafy is a cardiologist at the National Heart Institute Egypt, and head of the echocardiography department at El Marwa hospital. His passion is to teach echo, which he does for the "Egyptian doctors' syndicate". He is the founder of the SonoPro (www.facebook.com/groups/sonopro1000) initiative, where he conducts regular training programs.

The source of the Nile – how it all began
Here is the story: a 60-year-old man came to the hospital with typical chest pain, and signs and symptoms of heart failure. After AMI had been established, he started to receive streptokinase. An echocardiogram was performed shortly afterwards. What a surprise:

The curse of the pharaoh
What is going on here? Left ventricular function is obviously reduced, but what is wrong with the interventricular septum?

Resolving the myth
I would say this is a case of septal dissection caused by partial rupture of the interventricular septum. My guess is that the rupture occurred in the inferior part of IVS, at the border to the inferior wall. This is one of the most common locations of septal rupture. Clearly, the patient had an inferior infarction.The full magnitude of the problem becomes apparent when you look at the four-chamber view. Look how wide the dissection is:

Almost the entire interventricular septum a large chamber formed between the two layers. Interestingly, the left ventricular part of the IVS is still contracting.

A ventricular septal defect was ruled out on color Doppler. Thus, this is a case of an incomplete rupture, or rather dissection of the IVS.

Escaping Anubis
What would you recommend in this case? Clearly, there is a very high risk of complete rupture, especially because the patient has acute myocardial infarction: necrotic tissue is weak and prone to further rupture. The problem is not easy to correct by surgery. I would presume that the risk of mortality is quite high if he were to undergo surgery.
Unfortunately, we will never find out what happened to the patient. He simply walked out of the hospital once his symptoms of heart failure had improved. He was never seen again. The chances are high that Anubis got a hold of him.

Learning from the Egyptians
What do we learn from this case? First, social media such as Facebook are fantastic ways of sharing medical information. I would have never seen this case if Mohamed and 123sonography were not connected. Second, a rupture of the septum need not be complete. There are numerous forms and morphologies of dissection. While some patients have small fissures (also see the case A Trip to China), others may have septal aneurysm with rupture, or even a dissection of the IVS, as in this case. Please leave your comments here. We are curious to know whether you have seen something similar. If you are in the vicinity of Egypt and want to learn echo, visit Mohamed's echo courses. He is truly a dedicated teacher.