Would you board an airplane if you thought the pilot didn't know how to fly? Would you give your money to a financial consultant who had a bad service record? Would you buy a used car from someone who looked like a crook? These are just a few instances to show that trust plays an important role in life. Trust is most crucial in medicine. Here it is the doctor-patient relationship and the faith in the wisdom of medicine that may work wonders or cause a near-catastrophe, as the following case will show.

The root of distrust
Mario was diagnosed with endocarditis in his twenties. It must have been a very traumatic experience: a long stay in the hospital, endless tests, infusions, and uncertainty about the outcome of his condition. He was told that, sooner or later, he would have to undergo valve surgery - advice that Mario neglected. He tried to assuage his fears by exercising vigorously. On several occasions he was told that he should consult a specialist, but Mario didn’t like doctors.The referral to our echo lab was more or less a concession he made to his wife, who is a nurse at our hospital.

Something really big
Mario is now 46; 25 years have passed since he presented with endocarditis. Here's what I found:

A huge left atrium.
The most stunning finding was an enormously enlarged left atrium. I have seen huge atria and even posted my record-breaking left atrium (947ml) on Facebook to see whether anyone could beat it  (no one did), but this one was even larger.
Large left atrium with dilated pulmonary veins  and an
expanded left atrial appendage. LVF appears hyperdynamic.
The calculated volume was 1320 ml! The volume of the left atrial appendage alone was greater than the entire left atrium of a healthy individual. The left ventricle did not appear very large in relation to the left atrium, but in absolute terms it was also significantly dilated (270 ml). How would you estimate left and right ventricular function? The left ventricle appears hyperdynamic while the right ventricle is reduced. We'll discuss this issue later when we take a closer look at the real problem.

The root of evil
Here is the color Doppler study:

Atypical (slanted) four-chamber view:
very severe mitral regurgitation
Mitral regurgitation is clearly the reason for the abnormalities we saw on the previous loops. No question: the patient also has enormous regurgitation. There is a huge flow convergence zone and a wide vena contracta. On a side note: when you estimate the size of the jet don’t forget to look at it in absolute terms and not relative to the size of the left atrium. Sure, the jet only fills a fraction of the atrium, but that's because the atrium is huge. In addition, MR appears less when the jet impinges on the atrial wall (Coanda effect). Why does the patient have MR in the first place?

Eccentric jet impinging on the lateral wall.
The jet is directed towards the lateral wall of the left atrium. This usually indicates a partial rupture (flail) or prolapse of the anterior leaflet. I am sure you recall our previous post (patterns – link: Patterns), where we took a closer look at “flail leaflets” and their relationship with the direction of the jet. Is this truly the mechanism here?
Dilated annulus and some degree of posterior mitral
leaflet restriction.
On the apical long-axis view you can see that the posterior leaflet is also somewhat restricted, but a definite prolapse or flail leaflet is not visible. Annular dilatation, which is a consequence of left ventricular and left atrial enlargement, certainly plays an important role. These are secondary findings. We still need to search for primary mitral valve pathology in order to explain MR.

A hole?
The two-chamber view will help to clarify the mechanism.

What does this mean for Mario? Was he right in disregarding the advice of those who told him he would need to undergo surgery? Twenty-five years have passed and he is still alive.

To answer this question let me go through the list of indications for surgery:

Neglect
Is he symptomatic? Mario says no, but when I questioned him in greater detail he admitted he has an “inconsistent pressure on the chest and the epigastrium” when ascending a flight of stairs. He thought it was related to his diet. He is convinced that omitting certain foods will solve the problem. He states that his exercise capacity is sufficient, but he does get short of breath after 15 “knee bends”.  Talking to Mario, it became quite clear that he was simply negating his symptoms.  He also had high pulmonary pressure (sPAP of 55 mmHg), so he couldn't possibly be asymptomatic. I would also expect the huge atrium to be compressing surrounding structures. 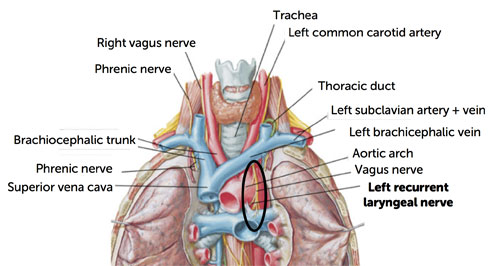 Anatomy of the vessels and nerves of the neck and upper chest: note the proximity between the left recurrent laryngeal nerve and the pulmonary veins/left atrium. A large atrium may cause compression and symptoms of hoarseness. It is not uncommon to experience symptoms of dysphagia or hoarseness (Ortner syndrome caused by compression of the left recurrent laryngeal nerve).

Looking at function
It is difficult to detect left ventricular dysfunction in patients with volume overload and reduced afterload (as in mitral regurgitation). Contractility appears better than it is. Sure, his function is “hyperdynamic”, but in the setting of very severe MR this could still mean that function is impaired.

In my opinion Mario definitely needs surgery. I confronted him with the fact and urged him to take a fresh look at his distrust of doctors and conventional medicine. However, I'm afraid he will do his best to avoid this option again.

PS: If you think this newsletter would be of interest to a friend or colleague, feel free to forward it to them. If you are the type of person who learns more from cases and examples than theory alone, sign up for our Master's course on echocardiography (link 123sonography.com). The teaching approach we use is based on cases and examples.